Intel’s upcoming 12-18 core X299 CPUs are now available to Pre-order at overclockers UK, though sadly the retailer has listed no ETA or shipping date.
Intel has stated previously that their i9 7920X would be available on August 28th and that their 14-18 core models would be available from September 25th. These dates may have changed since their initial publication, though we have received no update from Intel in this regard.
The specifications of Intel’s whole X299 CPU lineup is listed below, alongside the current UK pricing for each CPU

We can see that even with increased core counts, Intel has been able to offer some high turbo boost frequencies on their high core count CPU offerings, offering Turbo Boost 3.0 speeds of 4.4GHz, which is a high boost clock speed for any modern CPU. Even so, the base clock speeds of higher-end models do see a downward trend as core counts increase, especially after Intel’s CPUs reach a higher TDP of 165W. 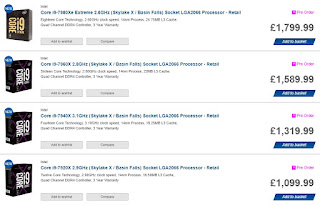